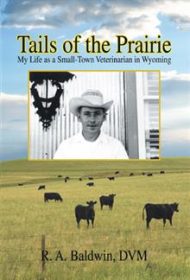 In this collection of stories, the author chronicles his years as a veterinarian in Wyoming’s vast, rugged ranchland from 1951 to 1964.

These stories speak to simpler times, underscoring the sometimes mind-boggling logistics of practicing medicine in such a wide-open, far-reaching landscape. On numerous occasions, the young doctor must journey more than 100 miles one way just to reach his patient, and often through snow, flooded roads and other risky conditions.

While the stories frequently involve sick, injured and dying animals, Baldwin relates them with a professional remove, albeit not without empathy and sometimes with genuine sorrow. In “Euthanasia,” a woman brings a dog in to be euthanized. She claims the dog is unfriendly and fears it will bite someone. Baldwin dislikes putting a dog to its death for no good reason, but she finally persuades him to do it. Later in the day, Baldwin learns the woman deceived him, prompting him to change his office policy and leaving him with lingering regret.

Some stories are quite comical, such as the time Baldwin’s wife, Harriet, answers the old-time crank telephone in the couple’s drug store and shouts instructions to the caller for cutting off the head of a dead horse so it can be sent to the lab. Meanwhile, customers at the drug store soda fountain only hear Harriet’s side of the conversation with phrases such as: “Cut the head off right behind the ears.” And: “Use a sharp axe!”

As befits the time period and location, these personal tales have a homespun feel and are often charming reminders of a different and certainly more challenging time. They occasionally feel redundant, with many tales of sick cows, and occasionally they lack a true narrative arc, such as in “The Mule,” which is mostly a commentary on foreign names.

Despite such issues, Tails of the Prairie will appeal to those who enjoy reading of a bygone era in a world where much is done with little.