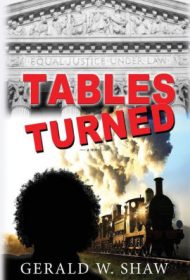 The years during and immediately after the Civil War were chaotic ones in Tennessee, where its citizens were torn between loyalties as battles raged. In this story, one of the few islands of relative tranquility is the modest Haven Hill plantation, whose owner, Henry O’Day, is the protagonist of this wide-ranging historical novel.

O’Day’s plantation is unique for its time in that he has declared slaves free to leave if they choose and allows them to participate in what somewhat resembles a profit-sharing plan if they don’t. This makes him unpopular with his slave-owning neighbors, a situation soon complicated when Karen Melaney, an Ohio abolitionist staying with her refugee parents at Haven Hill, is tried for being a Union spy. She gets off and, after the war, O’Day chooses her to defend him before a military tribunal on false charges of brutality toward his slaves.

Meanwhile in Washington, the author jarringly diverges from history with little warning. Here, Andrew Johnson is removed from office after impeachment (in real life, he remained), and the Senate passes a law requiring former slave holders to serve a term as slaves themselves, working fields they once owned. This last draws O’Day to Washington where, assisted by Melaney, he appears before the Supreme Court to challenge the primacy of the Constitution as a legal document.

The novel paints an interesting picture of how people lived and traveled in this era. But readers will find some elements difficult to believe. For example, Shaw’s portrayal of the supremely accomplished O’Day— successful landowner, lawyer, crack shot, feminist ahead of his time, etc.—seems over-the-top. Ditto his depiction of Andrew Johnson, widely considered among the worst presidents ever, who he paints as a wise and sympathetic figure. A woman lawyer defending O’Day at that time is also dubious.

Such issues impact the story’s effectiveness. Still, readers may appreciate the novel’s depiction of how a wide range of Americans coped with this troubled time in history.