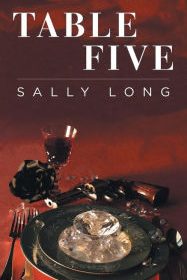 Sally Long’s Table Five is a charming story that’s part thriller and part romance with a healthy dose of humor.

Born and raised in rural Nebraska, Aggie Lantana has aspirations extending far beyond the Cornhusker state: to own a bistro in Europe. Toward that end, she works in various restaurants across the U.S. until she lands in upstate New York. Along the way, she decides to drop her first name and go by the name Lantana.

Lantana serves as narrator, offering a voice that’s engaging, self-deprecating and intelligent. She’s hired first as a hostess and works her way up to manager at the upscale La Ventana restaurant. When a double-murder/suicide occurs at the restaurant, suspicions surface about nearly everyone in Lantana’s world—including her.

The story’s element of danger is diminished, due to the drollness Long injects in descriptions of the crime, the characters and Lantana’s reactions to the situations she encounters. For example, her response upon learning she’s come into some good luck is palpable: “Well, slap my ass and call me Aggie, Agatha, dumfounded, anything you like.” Those seeking true suspense may be put off by these moments, but those who like humor with their crime novels will enjoy a few laugh-out-loud moments.

Sharing the pages with Lantana are: La Ventana’s seedy owner, international diamond smugglers, FBI agents, Italian and Polish immigrants and Fred, Lantana’s love interest. The author throws in a few twists and more murders to keep things lively. Meanwhile, Lantana and Fred become increasingly romantically involved as they try to unravel the intrigue surrounding the deaths and pursue the goal of opening an Italian restaurant, which sets in motion trips to Switzerland, Czechoslovakia and Italy.

A few misplaced apostrophes and a bizarre dream sequence are minor distractions. Overall, this is a disarming, entertaining novel. Table Five will appeal to readers looking for a light, well-written mystery.