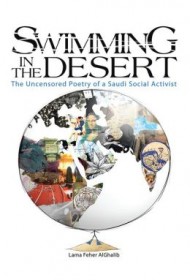 The title of Lama Feher AlGhalib’s collection of poems, Swimming in the Desert: The Uncensored Poetry of a Saudi Social Activist, reflects her political outlook. According to the back of the book, she has a “liberal, utopian” mindset. Surrounded by “global turmoil” and living in a “world of wealth where still millions are dying of malnutrition,” her poetry, the back cover blurb continues, “captures her struggle to cope with her surroundings…”

The book is divided into three chapters, “On Identity,” “On Life,” and “On Society. One of the main themes is perseverance, as in “Where There’s a Will, There’s a Way,” which begins with these commands: “If you set your mind to something, / Carry it out. / Overcome all obstacles. / Never stop to doubt.” While this, and most of her writing, is not culturally specific, the poem goes on to name role models that reveal her multicultural influences, “Prophet Mohammed…, Gandhi, / Helen Keller, Ibn Khwārizmī— / Many great people were victorious.”

A strong dynamic in AlGhalib’s poems is the struggle between resignation and hope for political and social change. In “A Message from a Tribal Girl,” she writes: “Our leaders shan’t be biased; / Our governments shan’t be corrupt. / … But what I’m speaking of are dreams— / And that is what they’ll stay.”

The poems here will not dazzle readers with figurative language or innovative form. Most lines are prose-like and deal in generalities, rather than offering vivid imagery and the kind of detail that would evoke a powerful emotional response. One poem, for example, begins, “Everyone has a story / Deep enough / Dark enough,” but it never goes on to describe or dramatize any of these deep, dark stories.

Despite this lack of poetic flourish and emotional resonance, these poems’ sincerity and openness may appeal to readers interested in “uncensored” thoughts from a Saudi woman working for intercultural peace and understanding.