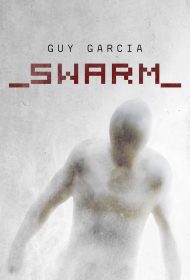 In Swarm, prolific journalist, novelist and multimedia entrepreneur Guy Garcia delivers a fantastic postmodern technothriller that marries the ethos of Michael Crichton to the inherent threats posed by social technology.

The novel opens in Afghanistan, where an Air Force airman commits a mass shooting before he’s gunned down by a fellow soldier. Square-jawed Homeland Security agent Jack Duggan is sent to investigate. Simultaneously, we visit Africa to meet evolutionary biologist Cara Park, who is soon drafted to consult on Duggan’s inquiry.

The story escalates when we meet its central character, Tom Ayana, a hacktivist with the online pseudonym “Swarm.” Most of Tom’s hijinks have been benign: designing flash mobs; getting into trouble with his best friend, a rising DJ; and stalking “Lucy in the Sky,” an Internet crush. But things change when Tom is contacted by an anonymous-style resistance called the Meta Militia, which gifts the young hacker some dangerous code called zeph.r. Leaked by a rogue Department of Defense scientist, zeph.r can be broadcast through the air and increases the susceptibility of the human brain to visual and audio suggestion—the ultimate brainwashing technique.

Tom begins experimenting with the code at EDM (electronic dance music) concerts, discovering that zeph.r can induce a hallucinatory hive mind-state. As his “rave plague” spreads nationwide and Tom is poised to unleash his ultimate digital revolution, Jack and Cara are hot on his trail.

Much like the work of Marcus Sakey or Cory Doctorow, this novel combines a frighteningly viable technology with the unstable nature of revolutionary ideology. Moreover, the writing is crisp, the characters compelling, and its concepts daring in a world where technology often controls us, not the other way around.

Although a satisfying yet ambiguous ending hints at a sequel, Garcia leaves readers with a clever Easter egg in a scannable QR code. This code leads to “The Swarm Manifesto,” a trippy video that finds Swarm addressing readers directly. It’s a nifty addition to an utterly thrilling novel.