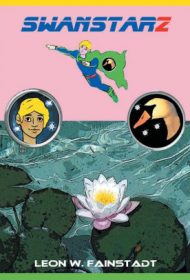 Fainstadt is an artist and author, and Swanstarz was inspired by a painting he created. It tells the story of siblings who awaken the people of Earth from apathy and prompt an environmental revolution. The story is relayed in just a few pages of text. It concerns Swanstarz and Serene, son and daughter of Zeus, who travel to Earth and use a “mirror-future-monitor” to show people problems their selfish actions could pose for their heirs. The story ends hopefully but urgently, pleading for action on climate change, fracking (spelled “fracting”) and women’s equality.

Fainstadt’s message of environmental responsibility is common, but his method of communicating is uniquely personal. The few pages of text feature boldface and underlined words and phrases to draw attention. It’s sometimes difficult to grasp Fainstadt’s meaning because of ineffective punctuation, inconsistent capitalization and a general lack of fine-tuning.

Other pages are dominated by images of his heroes, such as Al Gore, Prince Charles and Queen Elizabeth, along with computer-combined photographs, art and text to add details to the story and create poster-like inspirational composites.

Mostly packed four to a page, these image/text combinations often are compelling, but as a whole, they lack focus. One quarter-page section might refer directly to the story, while the other three proclaim environmentally friendly slogans such as “Go green and keep it clean and healthy.”

Swanstarz has much to offer in imagination and passion but suffers from its disjointed, didactic storytelling. Subtitled “A Children’s Book for Adults,” it tries to cater to both audiences, but Fainstadt’s story is often overpowered by his message, with visuals more reminiscent of protest signs than pictures in a children’s storybook. As such, it requires some rethinking and revision to find an enthusiastic audience.