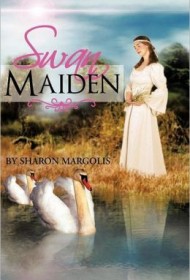 Can a proud, six-foot-tall Saxon woman find love married to a Frankish count who helped slaughter her friends and family? That’s the dilemma facing Kara, a healer and daughter of Hergar the Giant, in this passionate historical romance set around 800 A.D. in Saxony.

Known as the Swan Maiden because of her webbed foot, 16-year-old Kara is forced to marry Count Gerin, who serves Charlemagne in spreading Christianity across the region. Inwardly gentle, Gerin exhibits outer strength to uphold his position and maintain the respect of his soldiers.

Planned as a strategic move by the Franks, their marriage bridges the conquered and the conqueror. Unwilling to relinquish her pagan ways, including sacrificing animals and praying to various deities, Kara undergoes baptism, yet privately holds onto her religion. Her marriage also demands that she forfeit her relationship with her Saxon half-brother, a sworn enemy of the Franks.

Over time, the couple forms a marital truce resulting in love and three children, despite her frequent outbursts and secretive behavior to aid her brother. Each infraction earns Kara punishments from her husband, including temporary banishment. Gerin spends most of his time either bedding Kara or berating her as one would a disobedient child.

Filled with historical references to culture, religion, and politics, the story’s occasional anachronistic dialogue can be jarring. The words “slut” and “whore,” which weren’t used until the 1500s, and “grumpy,” which wasn’t used until the mid-1700s, according to Merriam Webster, stand out among several minor language mistakes. (Readers also may wonder why Kara, a respected healer, wouldn’t know what to do when her newborn baby makes a sucking motion. “ ‘Put him to your breast, milady, and he’ll soon be asleep,’ ” Gisela suggested.”)

Despite such missteps, the author appears to strive for historical accuracy. She offers a lively writing style rich with dialogue and descriptive narrative, delivering a read that will satisfy fans of historical romance.