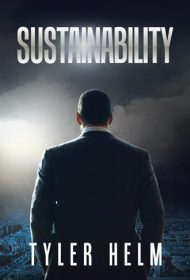 More than 100 years after Thomas Edison and Nicola Tesla fought a war over electricity, two billionaires clash over an equally dynamic breakthrough rooted in renewable energy.

Tyler Helm’s novel Sustainability, concerns a high-stakes battle to control the future of the world’s energy market, starting with Neom, a planned Saudi Arabia metropolis, the brainchild of two princes from the royal family. This super city and its lucrative contract for power is squarely in the sights of Jim Dunsmuir, a gifted entrepreneur with a talent for predictive analysis. Backed by an A-team of financiers, advisors, and beautiful geothermal energy expert Garcia Grey, Dunsmuir knows that if Neom’s electrical needs can be met sustainably, the world could follow. “The project is bigger than me and it’s bigger than Neom,” says Dunsmuir. “It’ll change the world. Our design will globally enforce that renewable energy is efficient, reliable and, most importantly, profitable on a large scale.”

As always in the cutthroat world of commerce, there’s a dangerous rival lurking nearby: former oil magnate George Anderson, who sunk his fortunate into Blade Solar, one of the world’s largest solar companies. Anderson soon deploys his secret weapon: an ex-NYPD detective and his transnational team of hackers, heavies and other vicious operatives.

Dunsmuir is fiercely competitive, and while a somewhat more sympathetic protagonist would have been nice, there’s intrigue in the vicious contest of wills at play here. It’s a globe-trotting thriller with stops in Iceland, Africa, Las Vegas and Texas, as well as the desert kingdom.

High finance and cutthroat competition aren’t always easy to portray, and the ringleaders spend far too much time talking their comrades through their often-convoluted plans. But about halfway in, the plot kicks into high gear as the competitors begin to reveal the depths of their ambitions and ruthlessness.

With disparate elements that recall everything from spy thrillers to Ayn Rand’s ethical conundrums, Helm has crafted an unpredictable thriller that doesn’t let anyone get away clean.