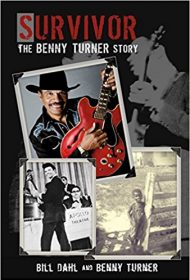 In Survivor, legendary musician Benny Turner spins a mesmerizing memoir about the life and times of a journeyman blues bassist.

Readers travel back in time to the waning days of the Great Depression, Jim Crow laws and the advent of WWII, when people of all races and color had good reason to sing the blues. Turner was born in 1939, and times were hard in East Texas, where he grew up with big brother, blues guitarist Freddie King. Later, after the family relocated to Chicago when Turner was 11, fistfights became a way of life in school, as did going the other way when police appeared. But things started to improve when Turner dropped out of school and began getting music gigs. He never looked back.

The book is a veritable treasure trove of trivia for music buffs. Anecdotes abound involving music stars Howlin’ Wolf, Dee Clark, Mighty Joe Young, Muddy Waters, and Otis Redding, among others. Overnight, Turner jumped from the “Chitlin Circuit” to the famed Apollo Theatre. In later years, he went on to back Gladys Knight, Sam Cooke, and B.B. King.

The stories just keep coming in this freewheeling memoir, narrated in a warm conversational style that’s never boastful. There was the night he played dominoes with Ray Charles (Charles would feel the numbers by turning them over in his hands.) And the time his band played Madison Square Garden with Grand Funk Railroad. And the night Dionne Warwick asked to be put on the bill ahead of his group because they were such a tough act to follow.

There’s so much to like about this incredibly detailed book, complete with vintage photos. It clearly was a labor of love for the collaborators, who spent hundreds of hours painstakingly documenting this classic bluesman’s storied past. We are all the richer for it.

Highly recommended for fans of Miles by Miles Davis, and David Ritz’s Divided Soul: The Life of Marvin Gaye.