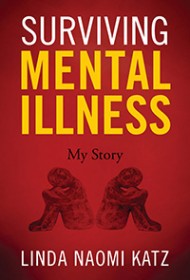 Linda Naomi Katz was diagnosed with bipolar disorder at age 24, but she suspects her mental illness began in her teen years when she struggled with anxiety, nervousness and excessive sadness. This memoir relates her personal journey, covering the various drugs she was given to keep her moods under control, the many jobs she tried to keep and lost, and the stigma and discrimination she often felt from others who didn’t understand her illness. It also highlights her successes after eventually finding work as a mental health advocate. It was a field where she felt “accepted and appreciated” and became a place where she could both “recover and fight for the mentally ill.”

Before embarking on her own story, Katz opens the book with a chapter explaining the various types of mental illness that exist; the treatments, therapies and support groups that can help the afflicted; as well as important organizations that effectively assist people with mental illness, such as NAMI, the National Alliance of the Mentally Ill. By sharing her difficulties, she says, her aim with the book is to show others with mental illness that they can recover, which, by her definition, means “to get back into life.”

Katz tells her story in a straightforward, unadorned manner and lays out the details of her life clearly, though with few references to specific dates. There are no sources provided for the information she includes on mental illness, which would have enhanced that chapter’s credibility. Nonetheless, the book effectively illustrates how, despite a lifetime of emotional situations, Katz found happiness. She believes others with mental illness can do the same with support from organizations designed to help.

In short, Surviving Mental Illness is a simple, easy read that may offer an uplifting message to others coping with mental illness.