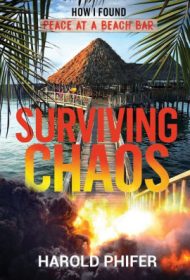 Author Harold Phifer recounts the engaging story of his life in Surviving Chaos.

The narrative begins on a beach in Thailand, to which Phifer has escaped after 10 years as a contractor working air traffic control in Afghanistan. There, he was nearly killed in a Taliban attack, an incident that caused him to seek physical and mental refuge in Thailand.

During Phifer’s usual morning round of margaritas, an older gent from New York strikes up a conversation. He wants to hear the author’s story, and Phifer agrees—provided the man supplies the drinks.

Phifer then recounts his life for his audience of one, interspersing details of the horrific Afghan attack with his recollections. His Mississippi childhood was difficult because of poverty and his mother’s severe mental illness, which resulted in the family being ostracized. His search for the father who abandoned him at birth, his younger brother’s murder, failed romances, workplace racism all spill out. The chance encounter with Dylan turns out to be cathartic.

His narrative is interesting, and often much fun. Discussing Dead Eye Red, a crimson-wigged woman who held court at the local juke joint during his youth, he writes: “If her mouth was open, she was swearing. But music, liquor, and men revved her up like a steel locomotive… There were fights and shouting matches just for a chance to be near her. Dead Eye Red loved every minute of it, and spanked her own little butt as she worked the floor. It was her house.”

Still, there are other events that don’t completely ring true. For example, his request for a transfer at one job was blocked, he says, because he was a fan of Mississippi State’s basketball team and his supervisor preferred the University of Kentucky, Mississippi’s rival.

Nonetheless, his tales are entertaining, sprinkled with humor, drama and sadness. Readers will discover an intriguing life, one of turmoil and finally, thanks to a stranger on a beach, inner peace.

Also available as an audio book and ebook.