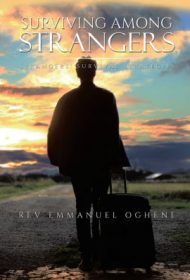 Tensions between immigrants, migrants, refugees, and native inhabitants have existed for millennia, argues Reverend Emmanuel Oghene, who addresses the topic in his book Surviving Among Strangers.

Nowhere is the immigrant story more apparent than in the Bible, where Jews and other peoples of the Middle East were constantly fleeing disaster, crossing borders, arguing over land, warring with each other, and intermarrying. Although many of these events happened over 2,500 years ago, Oghene believes we can learn from our Biblical ancestors. The stories of Abraham, Isaac, Joseph, and many others can help us compassionately handle and peacefully accept strangers from strange lands.

While Surviving Among Strangers covers numerous events and characters from Scripture, the author seems to favor King David, describing in detail his sojourn in Philistine, where he’s treated with favor by King Achish. While this story of refugee and royalty is complicated, the lesson here seems to be one of reverse meritocracy: a person’s worth is inherent; it doesn’t need to be earned.

This is a long (1,028 pages) and dense book. Oghene is a passionate, thoughtful, and ambitious writer who knows his Bible and subject, as demonstrated in the copious quotes and references to migrants and immigrants in his text.

Yet, the book is extremely difficult to traverse with awkward prose and numerous run-ons. Sentences like “There is a dig-dong cat and mouse dealership between natives and migrants nearly inevitably” and “That sounds like natives’ resentment for migrants for diverse reasons have been around since human record led by the Sacred Books now known as the Holy Bible began” leave readers confused and guessing about many of his ideas and arguments.

The lives and social and economic challenges of migrants and immigrants are a hot topic. Oghene has much to say, but his book needs serious rewriting and editing before his ideas can effectively help those searching for acceptance—and a home.