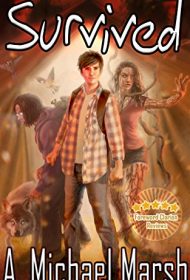 The second installment in A. Michael Marsh’s Manal’s Resurgence saga, after 2013’s The Changed, continues the apocalyptic adventures of teenager Oscar Huntington and his companions as they try to survive long enough to find a way to stop the Sickness that is killing the majority of humanity and irrevocably giving some of the survivors X-Men-like powers (thus, they are referred to as the “Changed”).

The story is set approximately six months after the conclusion of The Changed. Oscar and friends are now living in an abandoned farming community with a perimeter that has been completely barricaded by a government organization called the EDC, whose mission is to essentially quarantine the area and ensure the plague is contained.

With no communication with the outside world, the residents of Salvation have no idea if civilization even exists. But when an EDC operative dressed in a full hazmat suit, and an Army soldier breach the barricade in the same day—and try to kill each other—Oscar and the rest of the Changed realize immediately that something monumental has happened outside the walls.

The storyline in this second installment is much more intricate than its sequel. The narrative branches out and follows a handful of fascinating plot threads: Oscar embarking on a quest to find an important relic and understand the mysterious backstory of the Manal (a microorganism with the ability to transform humans into Changed); Rochelle battling a manipulative alien being in the Nowhere (a realm between dimensions), etc.

But the novel’s real power is the author’s use of tension throughout. Coupled with breakneck pacing and an action-packed storyline, the tension slowly rises throughout until it reaches its peak a few chapters from the end, making for an undeniable page-turner with an ending that is both satisfying and a tantalizer of sorts, brilliantly setting the table for a third installment in the future.

Overall, this is a fast and fun read set at world’s end.