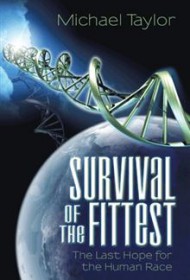 In Michael Taylor’s Survival of the Fittest: The Last Hope for the Human Race, seven teenagers may be the last humans left in a small town invaded by otherworldly monsters. They strive to overcome their differences, discovering that they are united by a secret: their bodies are mutating to be like the monsters, granting them superhuman abilities. But understanding what is happening to them means uncovering a secret history of government conspiracy, genetic engineering, and over 50 years of secrets and betrayals.

The author is a middle school teacher with a knack for describing teen life. He suggests distinctions of ethnicity and perspective without it becoming either conspicuous or didactic. Unfortunately, that same subtlety doesn’t extend to character interactions. The story doesn’t shy away from themes like broken homes, alcoholism, and drug abuse, but at times the author seems to sanitize the words that come from his characters’ mouths. Details about the aliens and their motives are sketchy, and threads of romance between characters sometimes trail off without resolution.

The dialogue is distinctive, but serves to drive the action more than to describe the psychology of the characters; instead, their motives and concerns are flatly stated in the narrative instead of being rendered into compelling scenes.

Survival of the Fittest is best understood as a young adult science fiction adventure (it is after all about teens who are destined to save the world!), and it has a certain appeal to its audience (fast pace, relatable dilemmas, high stakes). Additionally, the plot, while not original, provides some genuinely unexpected surprises along the way. Unfortunately, the novel feels unfinished, too synoptic, and in the end the reader is left with a cliffhanger that neither pays off the tensions of this installment, nor completely suggests what to expect from a sequel.