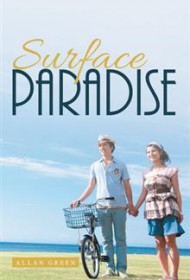 Surface Paradise, a romance novel, is the unique and ultimately tragic story about a man who drifts through life searching for some sort of fulfillment that seems to constantly elude him.

Raised in a privileged household, Michael Sykes’s father had hoped that he would follow in his footsteps as a successful bond trader, continuing the family’s legacy in Long Island. But Michael prefers literature, travel, and the prospect of romance. His travels bring him to Surface Paradise, Australia, and a holiday trip with his friend Ralph puts him in the presence of two prospective romantic matches. Gloria and Anne come from different backgrounds but they each catch Michael’s eye, and his attention goes back and forth.

The plot meanders as Michael wrangles his fickle emotions, and the back and forth becomes bit frustrating for the reader. But, just when it seems that Michael has finally come to a decision, a surprise twist turns the story in another direction and all frustration is forgotten. Fate has taken away Michael’s choice, and he is ultimately heartbroken.

Unfortunately, the book struggles with pace. The first few chapters feel rushed, and the timeline confusing. Then, it moves rather slowly and ends abruptly. The epilogue is again rushed and finishes without complete satisfaction.

That being said, Green expertly weaves the feel and culture of Australia into the story; the dialogue and banter between the characters is wholly enjoyable, and the exploration of gender roles is intelligent and thought provoking. Gloria is a highlight of the story, her independent nature, grace, and poise making her an extremely likeable female character.

Such strengths will help readers overlook the novel’s flaws. Despite its issues, Surface Paradise has a compelling quality and will be enjoyed by readers who appreciate a thoughtful romantic narrative.