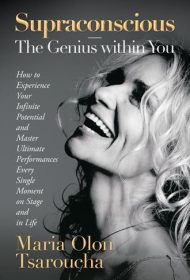 Maria Olon Tsaroucha’s performing arts book, Supraconscious, was about to be published in English when the coronavirus hit. Thus, she added a note: “How different, how miraculous, would this world be if we were all to become part of the minority of the enlightened?”

It’s uncertain how much more “enlightened” we’ll be when the COVID-19 coast clears. But Tsaroucha, a Greek actor, director and acting teacher, attempts to contribute to this lofty goal with a book about her PAD (Perceptual Acting and Directing) theory, which fuses quantum physics, mindfulness and method acting, which she claims doesn’t go far enough to acquaint actors with their own selves and how to live in the present moment. PAD, she writes, is “a training prerequisite for all artists involved in acting but also for contemporary human beings wishing to engage more deeply in the art of the here and now.”

After a slow start due to multiple monologues by supporters that essentially repeat the same concepts about the book’s purpose and what PAD theory is, Supraconscious becomes more dissertation than how-to. Still, Tsaroucha occasionally offers specific advice through simple guided imagery and role-playing and ends the book with straightforward exercises and visualizations. In particular, her thoughtful comments about empathy over ego, appearing in various chapters, work well.

Unfortunately, much of the book is difficult to understand, especially in the early chapters. Tsaroucha uses an overly academic writing style that seems stiff and obscure, such as her assertion that “the actor’s most important tool is the cultivation of perception and conscious connection to the energy that bears the form of an action in time-space.”

The mere mention of quantum physics will make some creative readers cringe, and even the author admits that the PAD theory is “difficult to understand but easy to put into practice.” Tsaroucha’s premise is a big one with a limited, albeit invested, audience, but a quick scan of the Table of Contents should help readers decide if this book is worth the undertaking.