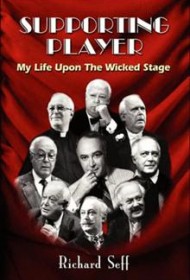 If you love the entertainment business, Supporting Player is a valuable addition to the canon of backstage lore about actors, directors and others who make show biz happen.

You’ve probably never heard of Richard Seff, hence the title. He worked with some of the greats in the middle third of the 20th century – Edward G. Robinson, Julie Andrews, Bob Fosse, Ethel Merman – yet always in the background: the military cadet who betrays a fellow student, the inmate in the cell two doors down from the star. It’s that slightly off center perspective that gives Supporting Player its heft, coupled with Seff’s matter-of-fact voice, which never strays into self-serving hagiography.

Seff was born Richard Siff in Flatbush, Brooklyn in 1928 and raised in a doting family that shuttled him off to theater camp in his youth. There he found his calling, which led to a performing arts high school and a string of minor roles in major Broadway plays. By the mid ‘50s, however, his career stalled, which led to a second career as a junior agent at MCA, the powerhouse talent agency. This section of the book is positively fascinating, as Seff regales us with tales of Claude Raines’ gentleness, 19-year-old Julie Andrews’ arrival on American shores and Rex Harrison’s near-nervous breakdown on the first night of tryouts for My Fair Lady.

Later, Seff segued into the movies and TV, this time as a “guest actor”: the cranky guy in the cab at the start of Taxi Driver, comic bits on The Mary Tyler Moore Show and Newhart. He eventually returned to the stage, coming full circle from that little boy who found his calling at camp.

At 400-plus pages, Supporting Player can be detail-heavy, as if someone has showered readers with confetti and asked them to examine every individual piece. But readers who fight their way through the distractions will find that rarest of literary things: a story that deserves telling.