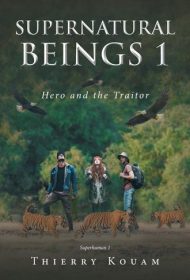 Twins with supernatural powers take on a gargantuan task—to destroy all human beings—in this new fantasy by Thierry Kouam.

When their king, powerful Philip, learns that 17-year-old twins in his realm, Hero and Prince, have more magical strengths than he does, he soon announces that the two lads have come to help their world. It seems they are tasked with eliminating the natural human beings, who many believe are responsible for the troubles of the supernatural race.

Hero and Prince journey to the human realm, where Hero saves a beautiful young human girl, Angel, from drowning, a traitorous act he knows he must keep secret. Meanwhile, the twins use their magic powers to acquire money and a place at university. They also experience romantic relationships. When Prince decides to use Angel in experiments to learn about how to manipulate and then destroy the human race, Hero is horrified—and little do they both know that Angel will assume a significant role in the cosmic changes afoot.

With its college-age creatures, the story seems to target young adults. Much of the action focuses on school and extracurricular activities, boyfriends and girlfriends. However, the book’s writing issues are likely to deter these readers. The story features weak grammar, paragraphs as long as three pages, and sentences so protracted that they sometimes lose their meaning. Dialogue is hard to discern, with no separation from other text by space or punctuation, and the story’s many deviations, repetitions and unnecessary details make it a tough read, not only for young adults but others as well.

While the story’s conceit has promise, the narrative requires significant revision before it can attract an audience.