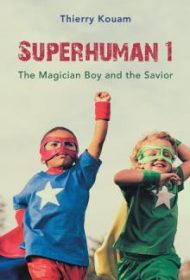 Author Thierry Kouam strives to create a sweeping and enveloping environment in this tale of a mystical land and fantastical heroes who wield magical powers.

On the world of Manitoba, the Queen Mother benevolently rules over a population that believes her to be a goddess. Her powers include the ability to heal, prevent curses and perform magic. Her reign is threatened, however, when her advisor Hector joins forces with a young wizard intent on destruction. Superhuman, a 13-year-old magician who receives visions of the future on the palms of his hands, learns of the plot and sets out to save the Queen Mother, as well as a witch named Luna and the entire population of Manitoba.

Kouam works to tell a classic tale of a hero’s journey, but it’s difficult to get immersed in the fantastical world sketched out here due to serious grammatical and narrative issues. The book is rife with misspellings, run-on sentences and confusing, long-winded paragraphs that simply don’t make sense. For example, in the introduction, Kouam claims that the story takes place on the “planet of Manitoba,” and proceeds to explain that the aforesaid planet lies between Canada and the United States.

That’s just the first in a long series of confusing statements and sentences that run throughout the book’s 270-plus pages.  Here’s a typical sentence that opens a paragraph that runs for eight pages: “Then, King got a sit, and keep watching what was going on in down town through the magic palm’s hand of King.”

Such muddled syntax, spelling and punctuation is the norm of the book. Unfortunately, it makes investment in the characters, plot line or details impossible, even for the most dedicated fantasy fan.