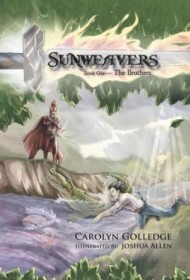 Author Carolyn Golledge shows her familiarity with the standards of science fiction in Sunweavers: Book One – The Brothers, the first in a series. The author’s experience as a contributor of fan fiction to the Star Wars Adventure Journal is clear in this story of evil Spider Lords, merciless inquisitors, malevolent emperors and Sunweavers, beings who boast a supernatural link to the elements and the emotions and thoughts of all living beings.

Such elements conjure up hints of Jedi powers and the dark lord of the Star Wars universe. Happily, Golledge invests plenty of her own voice in this sweeping if rambling tale. The book follows a common fantasy and science fiction trope, that of the desperate hero setting out on a seemingly impossible task.

Here, that hero is Taran m’Connor, a Sunweaver who is privy to special powers of deepened perception, connectedness and an ability to harvest power from the sun’s rays. As the novel opens, however, these powers have been robbed by the evil Spider Lords, baddies who have found a way to block the Sunweavers’ powers and, even more unsettling, to suck the souls from their bodies. That’s what has befallen m’Connor’s brother. M’Connor escapes the enemy’s clutches, then sets out to recover an ancient blade and restore his sibling.

Golledge’s narrative style is dynamic and engaging; there’s little to critique as far as vocabulary, usage and structure. But by jumping directly into the story, she neglects to offer adequate background for this alien world, populated by strange beings and marked by a complex history. From the first scenes in the Spider Lords’ torture chambers to the subsequent progress of m’Connor’s escape and quest, context is lacking. The result can be confusing, even with Golledge’s polished style. Those who have the tolerance to puzzle through such backstories, however, will find an entertaining story and will, perhaps, be better positioned to enjoy the others that are to come.