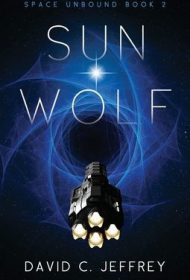 Set in 2217, the story begins with Aiden Macallan, commander of the Sun Wolf, returning from the Earth-like planet of Silvanus (which was at the center of a potential war in the first novel) to investigate reports of deliberate voidoid disruptions, which halt ship travel. The initial mystery is impressively complex: Who is carrying out the attacks, why are they attempting to destroy the gateways, and how are they doing it? Macallan and crew investigate numerous groups, including a radical wing of the One Earth movement called Green War, whose members believe humankind belongs on Earth and needs to focus its energies on rehabilitating the planet.

Meanwhile, Nobel Prize-winning astrophysicist Elgin Woo has inexplicably travelled far beyond “bound space” (the space humans can travel through with help of the voidoids) and is about to attempt to land on what seems to be a habitable world.

There’s much to like here: The hard scientific speculation is consistent throughout; the central characters are deeply developed (Woo steals the show); the pacing is brisk, and the action irrepressible. The concept of neurolinks and expanded consciousness is particularly fascinating: “A reality so complete and inclusive, so egoless and positive with light and love, so intense with meaning, that its stark absence had left Aiden stranded on its cold shores, naked and alone.”

One minor criticism is the awkward way the storyline waxes esoteric towards the novel’s conclusion (i..e. noting the “eternal dance of duality” always present in the universe). Tonally, the sequence doesn’t fit organically with the rest of story and detracts from the novel’s thematic punch.

This issue notwithstanding, fans of hard science will enjoy the story. And the author adeptly sets the table for a third installment with tantalizing dangling plot threads.