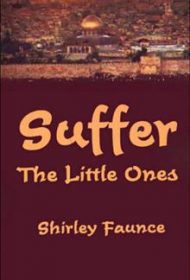 Shirley Faunce’s Suffer the Little Ones revolves around a young Roman girl living in Judea at the time of Jesus.

Crippled Flavia and her favorite servant and companion, Merriam, take the opportunity to see Jesus, the traveling teacher they have heard about. After sitting on his lap and gazing into his kind eyes, Flavia leaps off, cured, and now a devoted follower for life.

Soon thereafter, Flavia’s father informs her that the emperor has called him back to Rome and that he will move his family, and Merriam’s, there. Along the way, thieves attack the caravan, leading the girls’ parents to believe they’re dead. In reality, Flavia and Merriam have been taken to live with a Jewish family. Flavia’s faith is tested through this ordeal, and when she eventually reconciles with her family, she is also tested through other life events, including an encounter with the evil emperor Caligula.

Faunce does a nice job weaving an original story amidst a backdrop of true events and real characters. Bible and historical characters include Barabbas, the apostles Paul and Peter, Pontius Pilate, and the emperors Tiberius and Caligula. Her characters have realistic responses to events; for example, the author authentically shows readers a mother’s long-lasting grief when her daughter is assumed to be dead and another’s skepticism about Jesus and his ultimate motives.

Faunce’s story is well-researched, as evidenced by her use of terms particular to the time, such as “warrens” (crooked streets), “Paschal lamb,” and “Mater Familias.” A few minor weaknesses —the book’s cover looks a bit dated, and the text includes some punctuation errors—don’t detract greatly from the offering. While the book would feel more polished with such issues addressed, they are easily overlooked, and a Christian audience should enjoy this little gem!