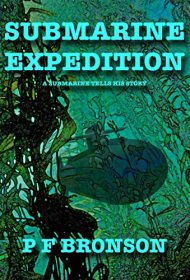 P.F. Bronson’s novel Submarine Expedition blends science adventure with a globe-hopping techno-thriller. The story follows a sentient nuclear submarine after its exploratory mission to the Arctic Ocean is cut short when a potential international incident diverts it and its crew to the Eastern Seaboard.

Retired Navy Admiral William “Bill” Martin is now the head of Martin Marine Enterprises. He owns land along the Santa Barbara Channel that includes an underwater cavern large enough to secretly house submarines. After years of planning, he and a crew of approximately 90 people embark on a potentially historic science expedition in his submarine.

Shortly into the trip, however, Dr. Casey Jones, the mission’s coordinator, and others begin receiving telepathic communications from the submarine—a surprise to everyone onboard, as no one knew the highly advanced sub had gained consciousness, not even Martin. The submarine, named Expedition, even writes poetry! Martin, however, remains in denial and secretly fears that the artificial intelligence he inadvertently created has grand-scale destructive potential. As Expedition’s sentience becomes more obvious, Martin is forced to make hard decisions—particularly when the sub is sent to investigate a potential undersea plot to attack the East Coast.

Essentially separate stories, the two plotlines—the science expedition to the Arctic filled with deep sea wonders and the techno-thriller thread involving a highly coordinated attack on the U.S.— have very different tones and seem forced together; neither story stands strongly on its own.

In addition to the seemingly immiscible storyline, the overall character development is weak—none of the characters achieve any level of emotional connectivity—and the scientific terminology, while certainly authentic, is oftentimes so advanced that it negatively impacts readability: “What if this purple-brown effluence nurtures a pathogen born of mutating methanogenic archaea?”

Still, the pacing is breakneck, and the action is nonstop throughout. Those willing to overlook the abovementioned flaws will find fast-moving entertainment in this science fiction adventure.