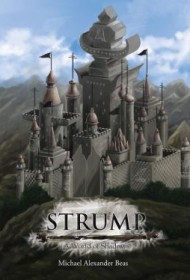 Michael Alexander Beas gets right to the dense details in his ambitious fantasy novel Strump: A World of Shadows. Within the very first paragraphs of the first in a scheduled trilogy, Beas describes a detailed world with an extremely detailed history. That approach sets the tone for this involved story set in a faraway fantasy realm called the Blue Kingdom.

A prologue spells out a complex origin story: An epic battle between forces of good and evil hinged on a game known as Strump and its playing pieces, each with magical powers. The noble King Aerostat won that battle, secured the important game pieces and divided the Blue Kingdom into four separate realms. Aerostat’s fellow heroes in the battle for the future of the world include mice, mermen and pixies, and the king divides the kingdom between these races.

As in the most standard fantasy works, that tale is just the backstory for a much larger story of good versus evil. After King Aerostat dies, his sons Prince Gorgan and Prince Alexander vie in an epic battle for the game’s pieces. That struggle holds huge consequences for the Blue Kingdom and pulls in an imaginative cast of pirates, sorcerers, talking animals and magical pixies.

Beas’ attention to the smallest detail of his imagined world is impressive, and he offers a tight narrative style that helps keep the story moving. That’s no small task, considering the breadth of this work, which spans more than 400 pages. In fact, though, that sheer density may be the work’s greatest downfall. The amount of lore, legends and mythology within the first 50 pages is difficult to remember and makes persevering through the entire tome challenging.

That said, the characters and plot structures are bound to appeal to hardcore fans of the fantasy genre. Beas has created a wide-ranging tale that, while missing the mark for casual fantasy readers, should appeal to the most hardcore fans of epic fiction.