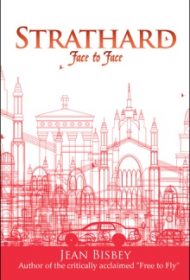 An alcoholic Canadian author of trash novels faces his demons and discovers a state of peace missing from his life after taking an unexpected detour to a Scottish place of enlightened learning.

Stevenson (Steve) Bruce is on an ocean voyage to England and away from his fractured marriage in Montreal when he and his agent, Buddy, encounter lovely young Miranda. The woman claims to be American and spins tales about having been born in a Scottish castle, but the men soon realize she’s a troubled woman filled with lies.

Miranda convinces the pair to detour to Strathard castle with her after showing Steve a magazine article interviewing Miranda’s sister, Jenny. Steve instantly is captivated by Jenny’s striking looks and wants to meet her, though he is trying hard not to lose his fragile connection to his young son, Sam.

Miranda holds deep anger at her sister, because Miranda was sent to live with a dour aunt in Canada after their mother died in childbirth while Jenny was raised at a castle. That, along with Steve’s raging alcoholism and the complexities of those connected to the castle, escalates the dramatic action. Destructive hidden secrets threaten the very meaning and purpose of the castle, which is designed as a utopian setting welcoming all belief systems.

This is the author’s third book penned around Strathard castle and the strongest, employing crisp dramatic action from the onset and memorable storytelling that is well paced throughout. As well, there is a strong interplay of believable characters.

Like the previous books, it is dense with rich imagery (“These were the seasoned voyagers, already tanned and well oiled. For them no unseemly rush to the deckchairs to bare their etiolated limbs, but rather to herd in the bars, the women with plunging cleavages and fluttering eyelashes, the men behind giant cigars.”)

While the text includes jarring typographical errors, including missing letters and words, the story nevertheless captivates with its palpable settings, enlightening Scottish history, and characters that ring true. In all, this satisfying novel is likely to appeal to a wide swath of readers.