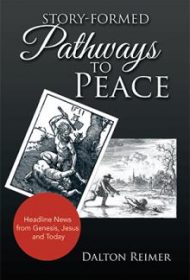 In his treatise Story-Formed Pathways to Peace, the co-founder of the Center for Peacemaking and Conflict Studies at Fresno Pacific University explores how the Bible chronicles humankind’s journey toward understanding the value of interpersonal relationships.

Examining stories from the book of Genesis, author Dalton Reimer outlines the evolution of human responses to conflict, including murder, separation, conciliation, and reconciliation. Here he unpacks Cain’s murder of his brother Abel as a response to jealousy; the separation of Abraham and Lot in response to disagreements over land and seemingly limited resources; the peace offerings of Jacob to his brother Esau as a response to guilt over familial betrayal; and the reconciliation of Joseph toward his brothers as a response to attempted fratricide. Reimer demonstrates that there is a rising of consciousness in these stories, a movement away from base primal responses toward sympathy and compassion as a means toward peace.

From here, Reimer explores an even higher level of understanding of harmony found in Jesus’s New Testament teachings. While Old Testament stories dealt primarily with forgiveness toward family members, the New Testament looks to address how we should act toward our enemies. Ultimately, Reimer argues that Jesus shows us that “All humans, however evil, are created in the image of God and are deserving of our care and respect, not for what they do but for who they are.”

Reimer writes with authority. His prose is generally clear and direct, his subject matter timely, and he argues his points methodically and with alacrity. Some of his summaries of Bible stories could easily be trimmed, however, and his chapter on genocide needs more development to clarify how it fits into the schema.

Despite such issues, Story-Formed Pathways to Peace provides solid reading. It should appeal to Christians looking to understand how far we’ve come in our understanding of forgiveness and how much further we need to go to fully embrace Jesus’s teachings of peace and nonviolence.