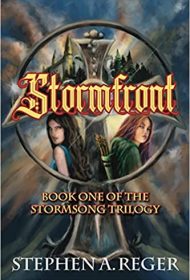 The first installment in Stephen A. Reger’s Stormsong trilogy is a sweeping historical fantasy set in Central Europe in 1618, at the beginning of the Thirty Years’ War.

Although the Holy Roman Empire is ruled by an aging, childless Emperor Matthias, the real power for the last several centuries has been the influential von Stormsong family, currently headed by Archduke Johann Albrecht von Stormsong, a devout Catholic whose fanatical faith has twisted his perceptions and made him into something of a monster. As he says at one point: “…it is impossible to properly appreciate the light without first knowing the darkness. And I know the darkness better than any man who has ever walked this Earth.”

An example is his warped relationship with his daughter Vanessa, whom he sends out into the world as a master assassin killing off “Satan’s servants”: Bohemian Protestants, revolutionaries, and those that practice the dark arts. As the violence between Catholics and Protestants intensifies, an orphan named Šarlatová, who lives with a band of thieves, attempts to save her outlaw family from the growing Catholic threat while also struggling to understand her seemingly godlike power. Political machinations and brutal violence bring the two young women together—with unforeseen revelations.

These characters are the fuel that powers the narrative. Both are impressively well-developed, emotionally connective, and have very different storylines. While the fantasy elements are decidedly muted—Vanessa has almost supernatural healing abilities, Šarlatová’s powers are largely untapped, and another character is a shapeshifter — the author reveals these fantastical elements slowly, making for a page-turning read.

The one major drawback is the author’s penchant for meticulous—and sometimes unnecessary—description, as when he details the architectural style and history of various buildings throughout Central Europe. While some may find that this deep description complements the narrative, it slows momentum and negatively impacts overall intensity.

That aside, readers should find this an intriguing and satisfying fusion of historical fiction and low fantasy.