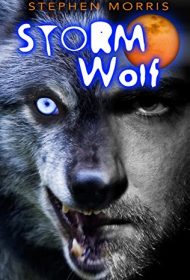 Storm Wolf, by Stephen Morris, is a unique weaving together and retelling of central and eastern European werewolf folk tales. Set in 1890, when such tales were still being told, Storm Wolf stands apart from contemporary myth and legend retellings, such as Neil Gaiman’s Ananzi Boys, or Diana Darling’s The Painted Alphabet.

A young Estonian farmer, Edvin, hunting with his father, kills his first wolf, an unusually large one. When an enormous late-summer storm threatens to destroy the fields and starve his village, Edvin courageously takes the wolf pelt to the village cunning woman, who transforms it into magic that allows Edvin, as a werewolf, to fly into the clouds, fight the storm demons there, and save his village.

Edvin bequeaths the pelt to his grandson, Alexei, but dies before giving him the necessary warnings. Alexei uses the pelt too often, loses control of the transformation, and becomes a destroyer, rather than a protector.  He flees his village searching for a magician to free him of the curse.

The magic—Alexei’s battles with storm creatures, the conjuring of a snake demon from pipe smoke, a witch’s talisman of skin stripped from a sailor— is extraordinarily well imagined and described here. Dollops of regional history and glimpses of customs and legends are fascinating, although they occasionally slow the pace with an academic tone.

Through Alexei’s journey, Morris stitches together a wonderful mix of unusual legends from Latvia, Lithuania, Poland, and Bohemia. However, the connections sometimes feel forced, and the book seems too long to support Alexei’s story alone. Readers may wish this were a collection of short stories, each focused on its own characters. (The barn sprite, the Master of Wolves, Spīdala, or even evil Frau Berhta would be worth stories of their own.)

For anyone interested in folk or fairy tales, however, Storm Wolf, with its rich descriptions and its introduction into unknown legends, provides a worthwhile read.