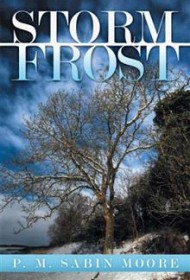 It is 592 AD, and two young princes from the East Anglians have set out to forge an alliance with the king of Wedresfeld, father to the lovely princess Niartha. Older brother Eni (also known as Wulf) falls hard for her, but his brother Raedwald is chosen to be betrothed. Niartha and Wulf meet secretly, but are betrayed by Eadwacer, steward to the king. Both are banished, Wulf to a remote island and Niartha to the rugged hinterland, where they endure hardship, danger and disaster while attempting to reunite.

Moore’s fictional period piece is based loosely on an old English poem, Wulf and Eadwacer, as well as on true historical figures. Throughout, the author adeptly describes ancient rites, worship of the gods and other practices during this pre-Christian era. In offering medicinal aid to an injured Raedwald, for example, Niartha “made possets of warm milk and honey, herbal concoctions of rue and comfrey . . . and had warm ointments of saffron and wax brought for his body-carl to use on his bruises.” She places offerings (a comb, a knife with an antler handle) on a dead woman’s grave, invoking favor from the gods. The book is enhanced with other enlightening details that add intrigue to the story, such as incorporating Niartha’s voice at a time when a woman’s point of view wasn’t heard.

Despite writing that occasionally lacks the emotional impact expected in more intense scenes, Moore packs a glittery nugget of 7th century history into a highly readable, realistic package with a compelling plot that crescendos to a satisfying conclusion.