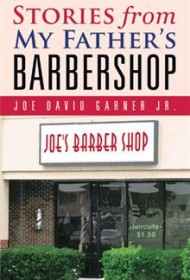 Joe David Garner Jr.’s father received his barber’s license while serving in the Army during WWII. Back home in Mississippi, a single chair under a shade tree surrounded by crates became his shop. His son wasn’t allowed to spend time there until he was ten, after which he soaked up the rather “adult” tall tales and true stories of customers, recounting several of them here.

Stories From My Father’s Barbershop shares customers’ stories about a dozen people either known to or related to them. They include bar brawls, brothels and blood feuds, all of which flow cleanly on the pages with humor, pathos, and heart.

Garner is a social worker, and he brings a big-picture awareness to these tales. For example, he writes about Ward Ellis, a man born in 1920. Ellis’ parents knew he was a smart boy and managed to present him with opportunities as often as possible, including reading lessons at a young age and at a much higher level than the local “Negro schools” would teach. Ellis followed his curiosity when he joined the military, and his intelligence and precision work landed him a job in the motor pool, which he parlayed into opening his own auto shop after his discharge. His story is inspiring, entertaining, and a powerful testimony about the value of early literacy.

The other stories are similar, spanning from the early 1900’s through the 1970’s and show the country’s changing attitudes toward African-Americans over time.

Should Garner decide to revise at some point, he might curb the tendency to introduce characters with their height and weight, which makes it sound like they’re entering a boxing ring. Loosening the dialogue up would help, too; it’s notably stiff next to his otherwise artful prose. These are minor criticisms, though, in a book of stories that deserve to be widely read for their historical perspective as well as for pure pleasure.