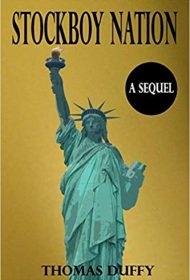 When a middle-aged man relocates from New York to California, he finds himself questioning his future.

Phillip Doherty is a twice-published author living with his fiancée, Melissa, in San Diego. His first book was a success, but despite promising early sales, his second, a fantasy novel, hasn’t fared well. Thus, Phillip needs a job, but his experience in the business world has been primarily at Milton’s World of Fun, a novelty bookstore in New York.

He begins applying for a variety of jobs, including at the Milton’s World of Fun in San Diego. Meanwhile, Melissa, who works for a legal firm and is not pleased with the prospect of her boyfriend becoming a 40-something year old stock boy, is growing increasingly annoyed at having to pay the bills and support him. Phillip decides his prospects will be better back in New York and returns to the city, but just when it seems he’s doing better, a COVID-like pandemic strikes, dramatically changing the world around him and his options for a better life.

Other than Phillip’s efforts to find a job and resolve issues with Melissa, this story mainly turns on Phillip’s day-to-day activities, his worries, and his indecisiveness about pretty much everything. There’s little information about the history of their relationship, why they moved to California, or even how long they have been there. At one point, readers learn that Phillip had pretended to be a teacher when he met Melissa, but there’s no explanation about why he felt the need for the deception or what that lie says about his character.

In addition, the dialogue can be difficult to follow due to a lack of attribution, and the writing is at times awkward and grammatically incorrect. For example: “Phillip leaned in for a goodnight kiss when his front door opened and Melissa came out to throw the garbage out from that night’s dinner she had cooked.” The narrative also switches occasionally from a limited point of view to an omniscient one, which can be jarring.

While there are some humorous scenes, such as Phillip attempting to dress a female mannequin, this tale needs a stronger plotline and greater polish to engage readers.