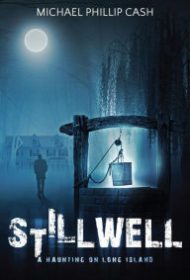 Stillwell will put ghost story fans in mind of Henry James’ Turn of the Screw. Michael Phillip Cash’s second novel, like James’ classic, is brief, hard hitting and ambiguous.  Readers are never quite sure whether the house in the story is actually haunted or the ghosts in the mansion come from Paul’s damaged psyche.  Are the spirits and monsters the protagonist sees really there or are they psychological manifestations?

For nearly a year, successful Long Island real estate agent Paul Russo devoted his life to helping his wife, Allison, battle an aggressive form of cancer.  But all of the radiation treatments, chemotherapy and experimental procedures were in vain. Not only is Paul devastated by her death, but the costs of fighting cancer and the lack of work while caring for her have left him nearly broke.

The week after Allison’s funeral, Paul is offered the opportunity to sell the $20-million Andrews mansion that belonged to the parents of a high school friend. The sale may be difficult because the house became available as the result of a bloody murder/suicide, but the commission would put Paul back on his feet financially.

Paul’s difficulty accepting Allison’s death is compounded by surreal dreams, his children’s reactions, and the Revolutionary War era ghost that haunts the Andrews mansion, a ghost who happens to be Allison’s doppelganger.

Despite the apt comparison to Henry James, Stillwell does have its faults. The ape-like monster that threatens Paul seems trite and out of place.  Paul’s children could have played a greater role and been more directly involved in the haunting.  And the conclusion lacks the frisson that lends intensity to earlier parts of the story.

Nevertheless, Stillwell is tightly written and suspenseful—a quick page-turner that is just the thing for fireside reading on a rainy autumn night.

Also available in ebook and audiobook.