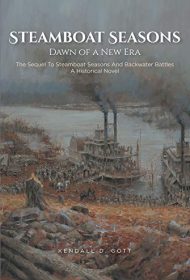 This historical novel is set in the summer of 1865, as a steamboat captain deals with his childhood sweetheart, who has been mentally damaged by her work as a nurse during the Civil War.

The novel’s narrator, never identified by name, is simply called “Captain.” With the war finally over, the 30-year-old former Union gunboat pilot becomes a steamboat captain. He also reunites with his childhood sweetheart, Ann, who accompanies him on the boat.

Soon, though, Ann begins exhibiting strange behaviors. For example, whenever the boat docks at a town, Ann looks for a drugstore, stocking up on medicine, including opium products. The Captain realizes Ann has become addicted, and what began as a pleasant reunion, which the Captain hoped would lead to marriage, has become a nightmare, with Ann experiencing drastic mood swings.

Now his problem is how to get rid of Ann safely. Keeping her on the steamboat against her will would be kidnapping, but letting her leave might mean she’d become “a bohemian” or end up in a lunatic asylum, diagnosed with “female hysteria.”

He decides to take the steamboat up the Missouri River, bringing Ann to her family’s home in Beardstown, Illinois, while also delivering a cargo shipment. But having avoided one calamity, the Captain discovers worse troubles lie ahead.

This is a big, detail-packed novel that offers an authentic glimpse into the past. Those who enjoyed Mark Twain’s memoir of his experiences as a steamboat pilot, Life on the Mississippi, might also enjoy this story (although it offers copious detail about the steamboat industry and the mechanics of maintaining and operating steamboats, which some might find tedious).

Unfortunately, the narrative is marred by poor description (e.g., we have no idea what Ann and the Captain look like) and reliance on telling instead of showing, which distances readers from the action. Typos also distract.

While such flaws will deter some readers, enthusiasts of post-Civil War American history will find rewards here.