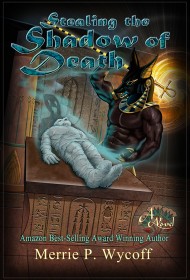 In this second in a series of historical novels set in 1300s BC Egypt, pre-teen royal Merit-Aten rapidly comes of age, moving from puppy love, to reverence for the divine, to devotion to the souls of the dead crying for her help.

The oldest daughter of Pharaoh Akhenaten and Queen Nefertiti, Merit-Aten is well aware of her royal status and thoroughly versed in the worship of the sun god Aten, a religion her father instituted. He has turned his people to monotheism and built an idyllic city, Akhet-Aten, where everything is shared and there is plenty for all. Elsewhere, though, rogue priests like Ptah-Mose, who still revere the old, dark god Amun, wait to regain power.

On the verge of womanhood, Merit-Aten is increasingly aware that she must choose to become a priestess and live a chaste, spiritual life, or find a worthy consort with whom to produce offspring while she waits to become queen. When she learns that the corpse of her grandmother, murdered by the Amunites, is in danger of desecration, she feels called to help. In carrying out the required rituals, she discovers within herself the great spiritual powers she is destined to wield.

Merrie P. Wycoff writes in an Author’s Note that she has wanted to tell the story of Akhenaten since she first saw his statue as a child. Her passion for the history is apparent, with her careful attention to the smallest details, and she infuses the story with intriguing mysticism. Some readers may at times feel bogged down by arcane terms, hyphenated names and formal language. But this is largely offset by the vivid, seemingly eye-witnessed scenes: a meeting with the great oracle, a mummification ceremony and more.

With a strong-minded heroine whose willingness to tackle monumental challenges belies her youth and a setting rich in history and exotic culture, Stealing the Shadow of Death seems certain to attract dedicated fans of fiction set in this time and place.