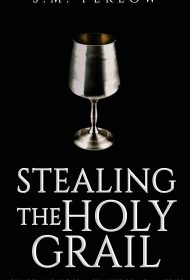 In the 490 years since Christ’s death, the Order of Nolvan has been tasked with protecting three precious relics: the sword that pierced Christ’s side; the Crown of Thorns; and, most important, the Holy Grail. All give their possessors powers, but drinking water from the grail heals all wounds and adds the possibility of eternal youth.

Beautiful Cera, who has been drinking the waters since age 24, looks as she did centuries ago. She’s the grail’s keeper, but because Order members refuse to share the magical waters with the sick and starving commoners, Cera hopes to spirit it away. Closely watched by higher members of the Order, she needs help.

Enter Sir Perceval, youngest of the Knights of the Round Table who has been accepted, after great trials, into the Order of Nolvan. Smitten by Cera, Sir Perceval agrees to her every whim. Meanwhile, aging Merlin, fearing his mortality, has recently murdered King Arthur and plans to steal the grail to regain his youth and power. Opposing them both is Roan, a fierce knight who has died and gone to hell, but the devil offers him a reprieve if he will destroy the grail.

The pleasingly peripatetic novel takes the protagonists across miles of Francia. With many well-wrought, fierce battles, the plot moves at a swift pace, and the story’s portrayal of Sir Perceval, the naive and brave young lover, is wholly convincing.

However, the comic-book-style use of italicized words for sound effects — “Cradack!” “Badoom!” “Thadump,” etc,— is distracting and unnecessary, and it seems unfair that readers learn only in the last line that this is Book I of a series.

Nonetheless, Perlow’s fresh take on the Round Table knights and Holy Grail provides an enjoyable and nostalgic read. Fans of the Sword and Sorcery genre of fantasy will eagerly await the sequel.