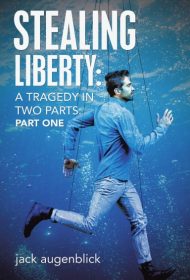 Authors rarely provide their own spoiler alerts. Yet, Jack Augenblick does so with the subtitle to his mystery Stealing Liberty, which indicates that there will be no resolution to his story, and that a sequel will follow.

The story has two main plotlines: In the first, 25-year-old Ollie is an unemployed painter living with his career-driven girlfriend, Starla. When Ollie was a kid, a friend saved him from drowning. Now, 12 years later, that person wants a return favor. The payback involves retrieving a package with unknown contents at an undisclosed location, and the friend threatens to harm Starla and Ollie’s parents if he doesn’t comply. Starla encourages Ollie to contact the police and his grandfather, a retired private investigator.

The other plot involves Starla. While Ollie’s in no hurry to propose to her, her parents apply intense pressure, suggesting that Ollie will end up as “ashes inside a jar” if he doesn’t.

The story is told mostly from Ollie’s perspective, and his character is portrayed as hapless, unable to make decisions. The latter comprises the bulk of the narrative as he vacillates between talking to authorities or making the pickup and whether to marry Starla.

While the setup has potential to be a page turner, the execution falls short. Trivial details and wordiness bog down the story: “I flick the headlights on, cut the cabin light, drive to Cruger, and drop her off. I watch as she enters the lobby and do so until she steps onto the elevator. I circle various blocks. Finally, I find a spot on Matthews Avenue. On my third attempt, I fit the car.”

Ollie lacks depth, and others— the requisite beautiful girlfriend, an overweight thug, and a goofy, albeit professional, P.I.—come across as comic book characters. Ollie’s inability to correctly assess situations makes it difficult to care about the outcome.

As a result of such flaws, the book isn’t likely to inspire readers to seek out the sequel.