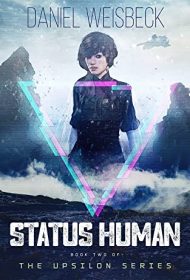 This exceptional second installment in Daniel Weisbeck’s Upsilon saga (after 2021’s Moon Rising) continues the story of Silon, a sentient android that could either be humankind’s next evolutionary step or the harbinger of its extinction.

Weisbeck opens up the storyline’s scope in this second installment, beginning with Silon (who resembles a young human girl) and her guardian, Teacher (aka Professor Bobby Houndstooth), former head of Anthropomorphism Programming at Nomad Robotics. They are living undercover on a remote island while hiding from those looking to destroy them.

Silon understands the secrecy; she is not only an invaluable piece of revolutionary technology that Nomad Robotics desperately wants back but also, perhaps, the first glimpse into post-humanity. But when she takes an interest in a boy working at a fish stand, she jeopardizes the safety of herself and Teacher.

Weisbeck also explores the story of Susan, an android similar to Silon who, after seemingly awakening from a year-long coma, struggles to uncover the truth of her existence. Is she a traumatized teen who suffered from an eating disorder and drug addiction, or is she something much more? Featuring more than a few jaw-dropping bombshell plot twists, Silon and Susan’s stories intertwine at novel’s end in grand style.

As good as Moon Rising was, Status Human is exponentially better. The pacing and intensity are off the charts, creating a pulse-pounding page-turner that readers will find extremely difficult to put down.

The author’s world-building is also excellent and much improved from the first novel. Weisbeck more than satisfies reader expectation with a focus on meticulous description throughout: “Unskinned metal skeletons sprouting hard drives, bio-mechanical organs, and dense cabling in a nervous system floated in the glass boxes, suspended in the same milky substance that filled the pool at my feet…”

This is a stand-up-and-applaud science fiction thriller. If this installment is any indication, the third novel should be spectacular.