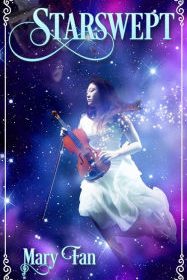 Although partially nodding to Brave New World, Logan’s Run and The Hunger Games trilogy, the science-fiction dystopian YA novel Starswept is its own blazingly unique creation. Prolific author Mary Fan (12 books published to date) spins a riveting tale against a backdrop of intergalactic human trafficking, brainwashing, corporate greed, freedom fighters, and the backstabbing culture of an exclusive performing arts academy.

In the year 2268, everything has been working well with the trade deal that Earth and humanoid alien planet Adrye established in 2157. Adrye shares its technology with Earth; Earth reciprocates by offering up its best/brightest young performing artists.

One of these young artists is 15-year-old Iris. Like Hunger Games’ Katniss, she also wields a powerful bow—yet hers is in service of her viola. While Iris dreams of achieving the kind of artistic excellence that would lead to an employment contract with a wealthy Adryil patron, she’s haunted by an internal ticking clock warning her that without a contract by her 21st birthday, she’ll be consigned to a life of abject poverty.

As Starswept spirals into ever-darker scenarios, Fan interweaves a contrapuntal theme of the myopic artistic life, examining the obsession for perfection versus placid normalcy (also taking into account art’s two-headed monsters of celebrity and commerce).

Fan is a master of description, be it character, place or sense, such as when ever-optimistic, self-deprecatory Iris refers to her viola player hands as “some kind of five-legged insect—small but freakishly flexible.” Or the academy: “It’s more than a school—it’s a nebula.” Or smell: “a mix of sweat and decay wrapped in smoke.” Further, each chapter opens with stunning artwork that acts as a visual prelude to the content.

The action never flags as mounting suspense meets romance meets high adventure. Clichés aside, Starswept is indeed a page-turner. This open-ended tome is obviously the first installment in an ongoing saga. Given the excellence of Starswept, the sequels will be well worth the wait.