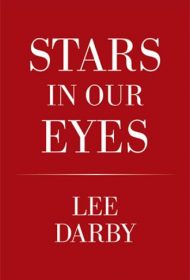 In Stars in Our Eyes, activist and free thinker Lee Darby recalls the changes she experienced as the quiet ‘50s of her childhood melded into the combative ‘60s and ‘70s, when she and her family became involved in a shocking series of events that reverberate even today.

Darby grew up in California in relative prosperity. She was close to her sister Sally, who was beautiful, self-assured, high-spirited and outspoken. Sally later worked as a kindergarten teacher and social activist, an aspect of her life that would lead to her death.

The author recalls the night her brother called with terrible news: Sally had been sitting in her car with a “prison activist” known as “Popeye” Jackson. She was dropping him off at his place at around 2 or 3 a.m. when they were both shot numerous times and killed by an unknown assailant. The notoriety that ensued plagued Darby, who needed the passage of time to accept her crushing grief and, to a notable extent, her anger about Sally’s passing.

Darby is a skilled wordsmith and keen observer of both her personal relationships and the socio-political scene. Here, she interweaves her own life events with the intriguing facts that ultimately linked Sally and her infamous companion to the highly publicized disappearance of Patty Hearst.

The narrative delivers a vivid portrait of the author as she gradually attains inner strength to combat untruths published about her sister (some posited that Sally was serving as an informer or betrayer at the time of her death). She also writes of her participation in rallies against violence of every kind and has recently begun working at a project in San Quentin prison. In the latter part of her story, she discusses a new battle: with cancer.

This is a refreshingly frank memoir that examines social action and coping with trauma. Those seeking ways to grow through deep-seated grief will especially appreciate Darby’s story.