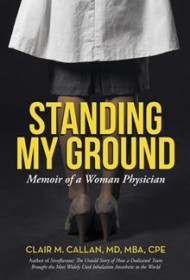 At only 21, Clair M. Callan finished medical school in her native Ireland, but gained the bulk of her professional experience during the next five decades in the U.S., where she and her husband settled shortly after her graduation. Her straightforward narrative follows her career and growing responsibilities — as a doctor’s wife (to her psychiatrist husband), mother of four, community volunteer, part-time then full-time employee and member of various professional associations.

Clearly, Callan was a hard worker and fast learner whose efforts paid off in promotions. After her residency in anesthesia at a Dublin hospital, her first U.S. job was as medical director for a summer camp. She later worked as a part-time physician for a hospital. After a stint as an anesthesiologist at another hospital, she took a part-time job with the state, determining Medicaid eligibility. Callan also served in paid positions with medical societies and in the pharmaceutical industry.

The author volunteered extensively and credits those experiences for her pluck in the corporate world. Her membership in the Officers’ Wives’ Club after her husband was drafted, for example, “had shown me that almost anything was possible if I wanted to do it or needed to try.”

The memoir is presented chronologically. Throughout, Callan introduces topics that would be of interest to other working women: the challenges of being a woman in a man’s world; the difficulty of juggling work, family and volunteer obligations. Unfortunately, she drops those subjects nearly as quickly as she raises them, choosing to focus on the trajectory of her life, instead of deeper insights. While her writing is solid, the narrative is structured without the craft of more accomplished memoirs.

The result is a book of limited appeal. Women interested in learning how to parlay volunteer work into career gains may find Callan’s example useful. But without broader insights to engage an audience, the book seems best suited to the author’s inner circle, rather than readers at large.