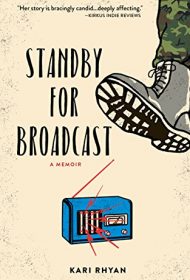 In the aftermath of a near-20-year Naval career, Kari Rhyan has written a dramatic story that reflects true life events and draws us into the heart and mind of a PTSD victim.

Following an Afghanistan deployment where she was assigned to the ER of a renowned British trauma unit located near “The Most Dangerous Place on Earth,” Rhyan is urged to leave her stateside administrative job and seek help for her declining mental health. Her dissociative behavior is worsening, she’s becoming addicted to drugs and alcohol, and she’s bought a gun.

A six-week stint at The Willows psychiatric facility prompts the unveiling and unraveling of Rhyan’s—as well as fellow service members’ —personal and war-induced turmoil. Through various therapies and under the guidance of an astute social worker, Rhyan takes readers into a military mire and also examines the toxic residue of her family dysfunction, childhood abuse, and her repressed sexual orientation.

Although not a typical battlefield memoir, in that Rhyan did not participate in direct combat, the author’s first-person narrative sets a realistic tone. While the language may be harsh in its profanity, it shows the heightened state of the characters. In the hospital “War Room,” a place where patients share their battle stories, the history of events is revealed via a more chronological perspective. Here visual details are a memorable component: It’s hard to erase the raw imagery that describes a quadruple amputee or a child burnt to the bone.

This is an emotional reveal about pain, fear, and the hope of recovery. Ultimately this poignant literary effort should appeal to both those who have served and those who have fought their own personal battles with similar strength and sensibility.