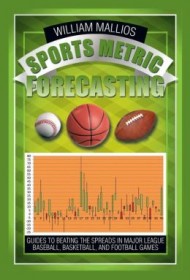 Gamblers are natural optimists usually willing to embrace any tool that will give them an edge—no matter how mysterious or difficult.

For those less than adept with such arcana as “adaptive drift modeling,” “principal component matrices” and “Japanese candlestick charts,” Sports Metric Forecasting can be a slog. But the mathematically astute reader/gambler will be rewarded with probability-based insights by sticking with the program. Mallios, who holds the intriguing title of “Professor of Decision Sciences,” assures us that if we can find what is called “gambling market inefficiency”—a discrepancy between oddsmakers’ published “point spreads” (the publicly perceived expectation of the final score differential in any game) and reality—then we can win a lot of bets, legal or illegal.

The author crams this slim volume full of charts, graphs and dense mathematical formulae—all of it calculated to put a smile on the face of any embattled gambler trying to beat the numbers. By necessity, Mallios is a technical writer (“Model (10.2.1) requires specification of the mechanisms through which coefficients are generated”), and such prose is not for casual readers hoping to glean a few simple tips. But the author by no means lacks wit. His observations on the attitudes of coaches and players can be wry, and he tempers jargon with passion: The reader suspects he’s made a phone call or three himself.

One fond wish: This compelling little book fairly cries out for a clear, concise chapter entitled How to Make Money Using These Theories. You know: the bottom line. As it stands, Mallios provides a potentially powerful weapon for those willing to work hard to decode it.