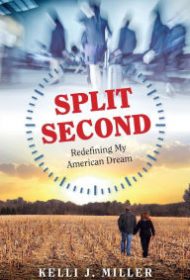 The first two words in the title of Kelli Miller’s memoir refer to how quickly an event can change your life. For Miller, it was her father’s cancer. Eager to care for him, she struggled to carve out time from her stressful job and family schedule and realized how unhappy she’d become—with her job, marriage and herself. Not only did she move back to her hometown to be with her father in the months before his death, but her soul-searching also led her to overhaul her life.

The strength of this memoir-cum-self-help guide is that Miller devotes equal time to analyzing her problems and detailing how she repaired them. Her lively, self-assured writing keeps things moving.

Before her father’s illness, she worked sometimes up to 90 hours a week as a high-paid executive in Seattle’s 21st-century high-tech industry. Her husband was home with their two school-age daughters, and their son had just started college. “I felt stuck in a lifestyle that continuously demanded me to be smarter, stronger, faster and more efficient than I was the day before . . .  Nothing about my life was feeding my soul.”

The demands on Miller and dissatisfaction at work had sapped her well-being. After her father’s death, she returned home with plans for change. She lost 70 pounds, worked on her neglected marriage, quit her job and moved her family to the Ohio farm she’d inherited. Miller skillfully examines what shaped her beliefs and shows how she dismantled negative thoughts to change her attitude and behavior, and her sure-footed writing allows readers to witness her hard-earned transformation.

The narrative is, unfortunately, marred by grammatical errors and typos, such as: “Whom are you going to be?” and “into a nook where a computer set.” Nonetheless, Miller’s work deserves a widespread audience and should particularly strike a chord among overburdened, unfulfilled workers wishing to find better balance in life.