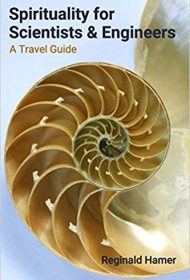 Spirituality and science appear to be competing disciplines. Adherents of “scientism” argue that only the scientific method produces true knowledge, while spirituality pursues meaning and a sense of interconnectedness. In this intriguing book, Reginald Hamer builds a bridge between the two, arguing that there’s no contradiction between the disciplines.

Hamer begins by offering an overview of how science grew to influence the Western world. He notes that early moderns invented science as the discipline we now know, splitting “philosophy” from “natural philosophy” (what we call “science”). Hamer discovered that early titans like Copernicus, Galileo, and Kepler perceived a profound order and beauty in the natural world that they didn’t hesitate to attribute to a greater intelligence or Providence. They saw no contradiction between spirituality and science.

As the book evolves, Hamer provides a modern, humanistic approach to spirituality for those trained as scientists and engineers. He speaks of God non-dogmatically, combining spirituality with psychology to show how people in STEM fields can increase their emotional intelligence, communicate better, and have more meaningful relationships. To this end, Hamer presents spiritual practices from various traditions, such as meditation, journaling, and contemplative prayer and includes exercises throughout.

The book also explains the language of spirituality—for example, discussing the distinction between “connotation” and “denotation.”

Hamer’s work is carefully edited and well-organized. Writing in the first person, he provides anecdotes that add a personable tone (although he tends to employ too many inspirational quotes), and he invites readers to use his book freely, taking only what they can apply. Although Hamer mentions God and other concepts from traditional spiritualties, his approach is nonthreatening and never demands readers accept metaphysical notions on his say-so.

This is an original, engaging work addressing domains where much narrow, binary thinking prevails. People in technical fields seeking an intro to spirituality would do well to start here.