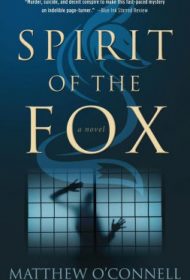 Meiko is in Tokyo with her father, a visiting university professor. Although Meiko’s parents divorced long ago, her mother returning to her native Japan, the estranged mother and daughter are now slowly re-establishing a relationship. But while touring a temple on a solo trip to Kyoto, Meiko follows a fox on a secluded trail, falls, hits her head and loses her memory. She’s found by a temple priest who names her Hana and offers help.

According to Japanese folklore, O’Connell explains, a woman encountering a fox alone is said to be possessed by the animal and able to seduce men, often leading to their demise. The narrative then follows Hana, who, unlike the level-headed, kind, sensitive Meiko, has become an opportunist, using sex and alcohol to charm her way into the lives of several men who give up their families, risk their livelihoods and more to be with her.

Meanwhile, Meiko’s parents, concerned at the lack of communication from Meiko, work to find her. Time is of the essence, as legend indicates that when a woman is possessed for over 30 days, her true personality will never resurface. Additionally, the lives of Hana’s men are endangered.

O’Connell beautifully and vividly describes the Japanese cityscapes, food and culture; for example: “There was a tiny Shinto shrine, about the size of a phone booth, tucked only about two feet into the white brick frame of a building…The outside was framed by a reddish-orange torri, or gate, with jagged white streamers of paper, like the tails of kites…” The main characters are likeable, caring and believable. And while the Meiko/Hana split personality could easily have failed, this element is handled masterfully.

As this story pitting myth against reality unwinds, murder, suicide, deceit and Meiko’s clever grandmother conspire to make it an indelible page-turner.