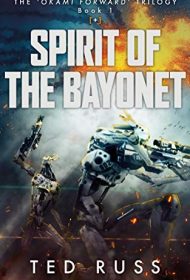 This first installment of Ted Russ’ Okami Forward trilogy is a wildly ambitious science fiction thriller incorporating the Japanese philosophy of Bushido with provocative, modern-day themes such as the military use of augmented soldiers and autonomous artificial intelligences.

Set in 2062, the story revolves around a prisoner’s struggle to survive on a penal spaceship. Paul Owens is among a handful of lucky prisoners chosen for a program allowing people convicted of nonviolent crimes to shorten their sentences by working in space. A year into his four-year mining mission to the asteroid belt, Owens spends his free time translating into English an ancient text written by a 16th century samurai. He also sips bourbon with his alcoholic captain, who rambles about his life and his concern about the ship’s AI executive officer.

When a group of prisoners mutinies, Owens must try to save the surviving crew members and detain the murderous prisoners. As a former soldier who was part of an elite corps whose members are augmented with cutting-edge technology, he uses his military experience to combat the mutineers. But another disturbing question arises: Why is the ship millions of miles off course?

This masterfully multi-tapestried novel intertwines several storylines, but with that narrative thickness comes bloat. In some sequences, the momentum is slowed by the multiple backstories. Additionally, the novel’s conclusion is merely a respite until Book Two, offering neither resolution nor tantalizing cliffhangers.

These flaws notwithstanding, this is an impressive narrative. Russ’s writing is well-matched to the subject matter: straightforward with few frills, yet highly descriptive nonetheless. He creates vivid characters, concocts riveting action scenes and seems to have a good knowledge of the science underpinning his story.

The thematic scope of this volume has a decided Golden Age feel (think Isaac Asimov’s Foundation saga). If Russ can continue this level of storytelling in the next two novels, the extended story could go down as pure science fiction gold.