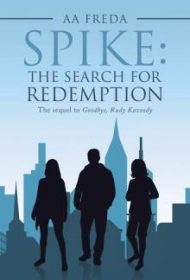 In AA Freda’s decade-spanning romance novel, rescue and the search for redemption shape the lives of Anthony, Angel, and the people around them.

Anthony meets Angel when he spots her about to get into trouble as an anti-Vietnam War protest in New York City deteriorates into violence between protestors and police. Anthony’s need to save people and “do the right thing” dictates how he lives his life, and in this instance, it will define his future and love life.

The pair have an undeniable attraction and soon become a couple. Their relationship has many hurdles to overcome, however: Angel’s difficult and haunted past, Anthony’s penchant for other women, and a possible murder accusation threaten to derail not only their romance, but Anthony’s future as a politician.

The couple’s complicated romance is told with a sense of detachment and as the first half of the book is paced slowly, it is somewhat difficult to initially become emotionally invested in the characters. However, the story picks up in the second half and readers can finally establish a connection with Anthony, Angel, and a charming cast of secondary characters.

At its heart, the story is a romance, with all the emotion and conflict that goes with any real relationship, as well as brief sex scenes. But, it’s also the story of a man who seeks redemption and how it affects those around him. The author must tackle an extended period of time, and also introduce first-time readers to characters from the first book in the series, Goodbye, Rudy Kazoody; these challenges are handled deftly. While reading the previous book would be a benefit, it isn’t necessary to enjoy this story.

Despite its slow start, Spike: The Search for Redemption is a charming romance and a satisfying read for those who wish to see their main characters transform as they navigate the complexities of love and life.