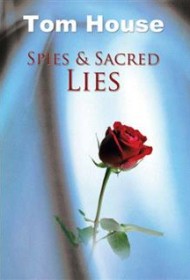 Author Tom House’s spy thriller follows a convoluted investigation by John Jameson, a Scottish operative for a secretive International intelligence agency, into the murder of several of his colleagues, as well as young Jews throughout Europe. The net Jameson must stretch to catch evidence of those involved is massive. Numerous spy agencies, including the Israelis’, the Brits’, the Russians’ and even the Vatican’s, are wound together in a snake den of a plot.

The real villains of the tale are a long-concealed worldwide group of righteous Nazis with plans to strike a blow for their cause by igniting nuclear weapons in Tehran and Tel Aviv. As one of the characters tells us: “Their aim is to rid the world of Jews and take over world control — when, is the big question.”

There are so many characters weaving in and out of the tale that the author has included a list of them at the end of the book that runs to nearly four full pages. It would have been helpful to have a guide to all the plot threads and storylines, too, as they are piled on to the point where the reader can feel like the Princess and the Pea, trying to locate the kernel of the story. There are references to 9/11 conspiracies, the Arc of the Covenant and the testament of Jesus. One ends the book having read a bit of 007, Indiana Jones, Clive Cussler’s Dirk Pitt thrillers and The Da Vinci Code.

House (not to be confused with the onetime Atlanta Braves pitcher) has worked for British security forces. He revels in his knowledge of security operations and computer use in that regard, and that knowledge holds the reader in good stead. But his tale is in need of an editor. Be prepared, as there is much to this prodigious book – and much of it is too much.