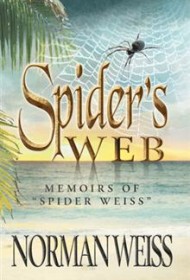 Life’s defining moment came early for Norman “Spider” Weiss, he reveals in his memoir, Spider’s Web. During the winter of 1943, Weiss, a skinny Jewish teenager, was summoned to a U.S. Army office and told that a relative in Russia had participated in a mutiny against the Czarists and become an officer in the Communist army. Weiss, who had applied to West Point and hoped to study French, was ordered to learn Russian instead, he guessed because of his relatives, though how he would have used the language isn’t explained.

“This hour … shaped my later life,” he writes. “It was a platform from which I made decisions … powerful news for a sixteen-year-old.”

It’s also a powerful starting point for the 85-year-old as he looks back on his life in Spider’s Web, though he doesn’t fully develop it.

Spider’s Web is part military memoir, part family history and part real estate primer. It suffers from extraneous detail in some areas, a dearth of relevant detail in others. The cast of characters is large enough to warrant an index, which he provides, but it’s still difficult to keep track.

The military portion is the most compelling. Weiss traces his career from West Point to his resignation from the Army a decade later following the suspicious death of former Secretary of Defense James Forrestal. The story reaches its crescendo when a colonel appears at the shoe store where Weiss later worked, demanding to know why he had quit the Army and what he knew about Forrestal. Weiss had reported that he thought the secretary might have been involved in a questionable venture that he doesn’t fully explain.

Though interesting in spots, Spider’s Web suffers greatly from repetition (whole anecdotes are repeated, often within pages), lack of a straightforward arc and considerable extraneous material (i.e. the crude drawing of a bikini-clad woman that inexplicably graces the back cover). These flaws render the memoir of limited interest to most readers.