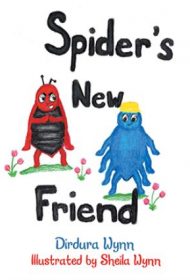 A spider forgives and helps the grouchy bug who once made fun of him in the children’s picture book Spider’s New Friend.

Spider is headed up the water spout to a market where spiders push carts and buy bugs for their families. But as rain begins to fall, Spider falls, too. Seeing this, Big Grouchy Bug makes fun of Spider, but Spider’s friends encourage him to try again, and this time, with the sun re-emerging, he’s successful.

Soon, Spider sees Big Grouchy Bug again, but now the mean bug has turned from red to green because of sickness. Though at first Spider is gleeful to see his enemy stricken, he rethinks his feelings and decides to get food for Big Grouchy Bug. Ten days later, the now-orange Grouchy Bug thanks Spider and apologizes for being mean earlier. The bug explains that just as red is his angry color and green his sick color, orange is his “happy color.” Spider’s kindness triumphs, and the two become friends.

The book’s message of forgiveness and kindness is worthy but obscured by several problems. The narrative is replete with punctuation and grammar errors: missing or misplaced quotation marks, for example, or the absence of question marks throughout, as in: ”Humm, kindness who knew. What’s Your Superpower.” Such mistakes often make the story hard to read.

Additionally, the text’s inconsistencies lend it an unpolished feel. For instance, the dedication page gives the book’s title as Spider New Friend, and the phrase “incy wincy,” used to describe Spider early in the book, shifts to “Incy Wency” later.

Finally, the hand-drawn artwork is puzzling in places: The water spout Spider climbs doesn’t appear to be attached to anything else, while a frog in the background of one page appears to be larger than a group of trees. Several images are reused throughout the book, with only minor changes.

Due to such issues, Spider’s New Friend requires revision to attract an audience.